Things I wrote a little longer ago

What I write about

I am a (soon to be) working mum blogging about family life, building work, working, cats, knitting & crochet

We’ve recently had such a great holiday I wanted to let you know about it, we don’t often go on beach holidays and this is our first since our honeymoon in Cuba.  Although we were visiting family in Turkey we found the cheapest way of getting there and having some holiday time was to book a package from the UK, with First Choice, and simply not come home!  I’ll tell you more about what we did after our holiday in a few future posts (don’t want to overexcite you by doing it all at once!)

We didn’t pay a great deal for our hotel and flights as we were out of season, and we decided to go all inclusive as we figured this would be the easiest option with a baby.  We stayed in Icmelar at the Fortuna Beach Hotel.  What I didn’t appreciate at the time was that this was over 2 hours from the airport, and we landed at around midnight…I was not particularly happy!  The 4 hour flight had been ok (although my grand plans of Jem sleeping did not pan out) but we were well equipped for entertainment, snacks and water.  The water was all drunk and this led to a leaky nappy all over my lap and the Baby Bjorn so a 2 hour coach journey did not put me in the best of moods.  However we were met at this antisocial hour with a drink, an offer of soup and a cot already set up in our room.  This was a smaller hotel than we would normally stay in, but I was impressed with the condition of the room, clean, well maintained and with a cute balcony.

We had specifically asked for a quiet room and we had no issues on this front, noise does tend to echo around the central foyer which I suspect would affect all rooms, but it was a quiet place and the other guests were considerate.

We woke up on our first day to dull grey weather which soon transformed into rain by the afternoon, but we did manage to sit outside for breakfast and our first beer [on a side note they had Efes on tap – virtually unheard of in the UK but my absolute favourite lager]!  We taught Jem to “cheers” and met a lovely couple to chat to.

To be honest the weather didn’t really matter, although I was desperate for some serious tan time I hadn’t quite appreciated the fact that every time Jem was released from the pushchair or highchair he would head straight for the pool…not exactly relaxing ! 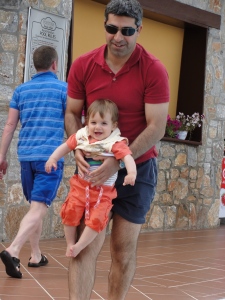 There were plenty of refreshments and we spent time in the lobby and lounge area either with  tea or coffee .  It was perfect as Jem really just wanted to explore so he crawled around, the other guests were great with him, but nothing compared to the brilliance of the staff who without exception would stop to greet him whenever they walked past!  Some guests did panic when they saw him near steps (because he just won’t use ramps) but luckily he could easily get up and down the couple of stairs on each level.

The weather did pick up throughout the week and we got a few days outside and Jem tried out the pool, which was impeccably clean if rather cool!

There were plenty of sun beds for the number of guests there and outside seating for meals.  The bar was outside and snacks were all close at hand.  All the eating and drinking made Jem quite tired! 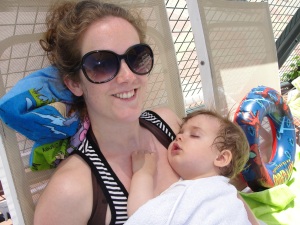 There were plenty of opportunities for exploring, up to the market, nearby shops, along the seafront past other hotels, the path towards Marmaris, and of course the beach. 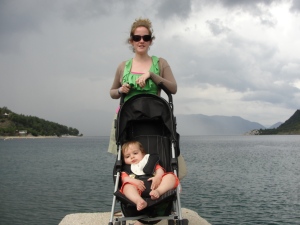 I must confess I don’t really like the sea  so the Turk did most of that when we did go down there, I much preferred the poolside at the hotel, but it was ok.  There was an area just for our hotel, someone on hand to help with sunbeds and as beaches/sea go it seemed just grand.

The real bonus of this holiday was the food, we expected there would be something for us to eat because the Turk and I will eat anything, pretty much, within reason…and we thought there would be something for Jem who will eat any meat, but it far exceeded our expectations.  I was almost dreading breakfast as I like a full English but knew it was unlikely, Jem has toast with Turkish cheese on at home so I figured he would be fine!  Actually the choice at breakfast was splendid and different every day we were there.  We tried allsorts, but I think the omelets might have been his favourite.  The same went for lunch and dinner, great food, all tasty, and the best bit was the selection of meze at each meal and the fantastic fresh salads.  I like salad and I usually complain when I’m away because they tend to be a bit wilted and unimaginative, but not here, it really was a great selection.  If I had to criticise anything about the hotel it would perhaps be the lack of hot vegetarian food, it didn’t bother us but my mum is a veggie so it’s something I do tend to look out for.

The other thing that I would like to mention is the staff, what a team.  Without exception every staff member was exceptional.  I often complain when in Turkey that I get completely ignored as everyone talks to the Turk, but that wasn’t the case here.  The staff were helpful, friendly, competent and extremely hard working, they really each took care to ensure that we got good service and enjoyed our time.  They were the best team I have experienced in a hotel and I simply can’t name names because they were all so good and it wouldn’t be fair (…although Jem did have his favourites!)

I always say that I would never go back to the same place twice…but we’ve already looked at prices to go back later this year, it really was very good.

Well the flights were never going to be great with an active 1 year old, we flew to Turkey with Thomson, having navigated online check in and been unable to print boarding cards due to a computer glitch at their end I was rather dubious.  However I was mistaken, the flight arrived on time despite leaving late, the staff were good and Jem was fairly well behaved.  The only slight issue came as we were trying to board, we were doing a last minute nappy change at the gate when they called for all passengers with children to board first.  I’m not certain I like this as it means even longer stuck on the plane so we were one of the last families to go forward, and when we did we then had a 15 minute wait in the tunnel waiting for the plane to open.  I appreciate this isn’t long but when you’re carrying a restless child and thought you were going to get straight on so closed the buggy it’s rather irritating!

The other thing I found unusual but was clearly just a sign that I’ve not been on a package holiday for a long time, was that staff from the airline didn’t join us on the bus (which was FREEZING – take a blanket!) but actually it didn’t matter.

The in hotel staff from First Choice were brilliant, we needed to cancel our return flight so had more interaction than we would usually and we were there while our original rep Alison was handing over to her replacement Joe.  They were both fantastic and lovely and quite willing to chat which we really liked, particularly as we hadn’t gone on any excursions or even attended the welcome meeting.

Our return flight was with Pegasus, a Turkish budget airline who are pretty much our only option for flying to and from family now Easyjet have stopped their route to Istanbul.  The price is similar to Easyjet, as are the flight times.  Again no complaints, the staff were friendly enough, the inflight food was comparable price to other budget airlines (we take our own snacks…) and although Jem was particularly energetic on the flight we had no complaints about the airline.