Things I wrote a little longer ago

What I write about

Join 2,156 other followers
I am a (soon to be) working mum blogging about family life, building work, working, cats, knitting & crochet

I’ve never particularly wanted children, but I knew if I did  I would want a girl.  When I was small I played with dolls, I had a beautiful rocking crib which I kept next to my bed and every night I put my doll to bed (note – she went straight to sleep).  My aunt has a son and a daughter, the girl was easy but the boy was not.  I have always been told that I was a delightful and easy child…probably because I’m a girl.

The Turk has 2 brothers and 1 sister.  His two brothers first born children were boys.  There is a proliferation of males in his family.

When I fell pregnant, I knew it would be a boy.

Of course I was always optimistic, you can never be sure, and I maintained the message “it doesn’t matter as long as it’s healthy”.  The more pregnant I became the more I believed this….each time I had a small panic I realised a bit more that it actually doesn’t matter.  My baby wasn’t a very active baby when I was pregnant, I frequently went a whole day with no movement, and would struggle to get to sleep without worrying only to be woken up at 2am by bouncing…

I wanted a girl.

I was so concerned that I didn’t find out the sex at my 20 week scan.  The Turk and his family all found this a bit odd, they wanted to know and apparently in Turkey it’s pretty routine to find out.  I was worried that if I had it confirmed to me that I was having a boy, I would be disappointed.  No one wants to be disappointed about the prospect of having a baby.  I felt that if I waited until I met the baby I wouldn’t care whether it was a boy or a girl because I would be so delighted to meet them.

Of course, I read everything there was to read about being pregnant, so I knew all the ‘signs’ of having a boy.  I had no morning sickness and a large prominent bump but with little weight anywhere else (actually this isn’t true, it’s just that the bump was so mahoosive that it distracted from the weight gain! Check out the pic if you don’t believe me!) 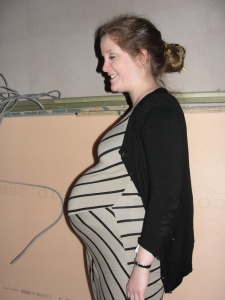 I think this was around 35 weeks

Clearly, everyone said, I was having a boy.

…I bought everything in blue (except 1 pink hoodie, you never know!)

My birth didn’t really go to plan, of all the things on my wish list I had to settle for just the most important one (excellent yoga teacher told me that our birth plan should be based on worst case scenario, whilst I was ‘planning’ a water birth in a birth centre, I should do my birth plan on the basis that I have an emergency c-section, this will ensure I focus on my priorities).  Epidural, forceps, detaching placenta, the only thing they could do from my birth plan was the thing written in big bold writing at the top:

“I want to look and see the sex of the baby myself, I don’t want anyone to tell me”

I reiterated this during the final stages of labour.

The Consultant, Obstetrician and 2 Trainee Midwives looked on whilst the amazing Midwife handed me a ball of slime and I looked…

Fortunately they gave me a second chance to look down there before they whisked him away and started my own repair job.  But I didn’t really care any more.

I'm very nosy and I'd love to know what you think? Cancel reply